No More Excuses For Ye?

At his YZYS9 show in Paris, Kanye West sent "White Lives Matter" T-shirts down the runway. I'm unsure whether to write about the consequences of using such a slogan on clothing or to ignore it entirely, as is advised when kids are acting up. I just have to say, it must really be difficult to be a Kanye fan right now.

I'm not entirely clear on what he's doing, Kanye West is an adult, and I don't believe this was so much of a tantrum as it was a response. For the black woman who walked that runway wearing a racist reaction to a significant civil rights movement, may I just say that I am sincerely concerned for her? It's hard to determine her political views or the degree of independence she exercised when getting ready.

Although his bad behavior can be traced back to statements like "George Bush doesn't care about Black people," "slavery seems like a choice," and Taylor at the VMAs, his recent acts have made many of us uncomfortable. The way he broke up with Kim Kardashian and spoke adoringly of his wife while simultaneously harassing her with flower delivery had a sensitive, burning sincerity that was also menacing.

Trying to determine whether West's acts are the product of deliberate planning, unrestrained impulsiveness, or both is a big part of his seemingly lasting appeal. (As he is bipolar, I'm not implying his mental health justifies his actions.) His thoughts are always interesting; there is a sense that he is coming from a different, harder-to-understand place. He is a jeen-yuhs at keeping us talking about him, igniting debate, and poking fun at our occasionally performative wokeness. He has been seen wearing a MAGA (Let's Make America Great Again) hat. He has been spotted with Donald Trump in the White House. Now he and Candace Owens are wearing identical "White Lives Matter" shirts. 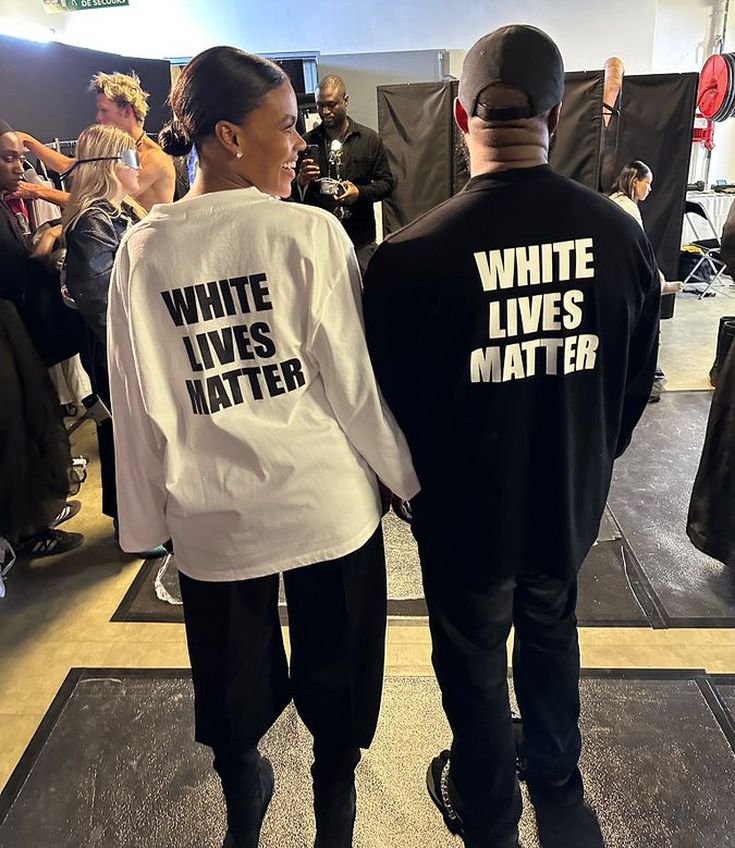 The shirts are stupid, flippant, or deadly, depending on your point of view. It would be good if the shirts could be quickly written off as "clout chasers." Another prank to destroy the status quo, stir controversy, or pose a problem.

Black Lives Matter did not state the worth of a non-Black person's life; white lives matter objectively. Although the movement focused on higher black fatality rates, mainly when black lives come in contact with police enforcement, those three words grew to symbolize many aspects of the black experience. Black Lives Matter supports racial equality rather than being anti-white. Black lives Matter because they are more vulnerable to danger on the streets, during arrests, and in jail. This only redresses the imbalance; it is not the same as stating that white lives didn't or don't count.

He never fails to reveal himself to us. We should not be shocked. He definitely isn't; thus, we ought to alter our response. He hasn't demonstrated any interest in seriously opposing white supremacy in a very long time, whether through Candace Owens or MAGA hats. Actually, he appears to be very at ease pacifying it.