What's In Store For "Emily in Paris"? 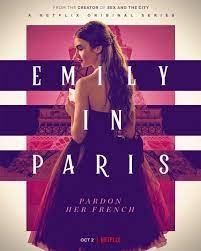 As Emily tried to find her footing in France in the Netflix series, created by Darren Star of Younger and Sex and The City, we were all falling in love with the City of Lights. Things did not work 100% as planned, of course, but they are all part of Emily's charm in Paris. There was nothing that Emily and her new colleagues faced from the crazy love triangles to slip-ups. So what's next for Savoir's favorite staff? And for another crazy season, are we going back to Paris?

As Emily continues her journey through Paris in season two, new characters appear, including a new love interest which is sure to stir things up.

Former Katy Keene star Lucien Laviscount will play Alfie, a charming and sarcastic cynic who refuses to learn French or immerse himself in French culture. His antagonistic relationship with Emily develops into something more as the season progresses."

Meanwhile, Gregory Elliott Dupree is a well-known fashion designer who was once a protégé of Pierre Cadault Gregory. He always travels with a collection of gorgeous clothes and gorgeous men, thanks to his larger-than-life style and personality. Pierre and Gregory were friends until Gregory's abrupt and dramatic departure from the atelier turned them into bitter enemies."

Laurent G, on the other hand, the charming and outgoing proprietor of a well-known Saint Tropez nightclub Laurent. He's a party boy who never grew up, agrees to help Emily promote one of her brands. However, Emily quickly discovers that his relationship with Savoir is more complicated than marketing."

We can't wait to see how these new characters shake things up even more now that there's already so much drama.

Season two of Emily in Paris has officially begun filming. The cast is very excited to get back to filming together. Based on a letter from Sylvie, Netflix released a video revealing that filming in the city of lights began on May 4.

"Je serai brève. We are writing to inform you that Emily Cooper's new work permit has been approved with a start date of May 3, 2021. As per our prior correspondence, she is an asset to SAVOIR and we hope she continues to have impact with our clients who are very particular about the results they expect from our agency."

According to Variety Insight, the series is currently scheduled to shoot until July 19, indicating a release date in early 2022 if all goes as planned.

"We hope that by extending her time in Paris, Emily will further the relationships she has already made, delve deeper into our culture, and perhaps pick up a few words of basic French," Sylvie wrote in a letter. "We will work in conjunction with you on applying for a work permit on her behalf to prolong her time here. We love having Emily in Paris! But please don't let her know that." 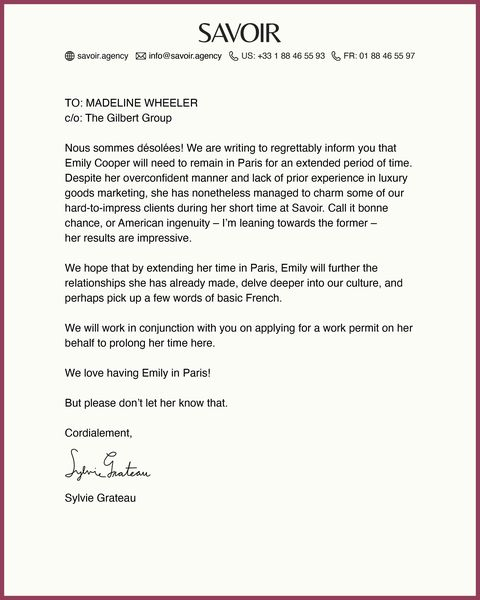 As Emily continues to work for Savoir and discovers who she is supposed to be within Paris, fans will have the opportunity to travel back to the City of Lights with her.

The major cliffhanger from Season 1 left fans wondering whether she would choose Gabriel or Mathieu. While we all have our own thoughts on the subject, the cast and creators have their own ideas about how things will play out.

With many men in her life, Emily will have to make a lot of difficult decisions. Even though she has a primary relationship with Gabriel, she also has a fantastic relationship with Camille, who has become very good friends.

There's no doubt that we'll see more of Emily as she juggles her new life in Paris with her responsibilities as Savoir. Not only does she have a lot of work to do to convince Sylvie that she is qualified to work there, but her relationship with Mathieu may complicate things further.

Not to mention Gabriel and Camille. Antoine revealed that he bought the restaurant for Gabriel for him to be able to stay in Paris. What an awkward situation, especially since they had just had sex. To make matters even crazier, Camille texted Emily with the good news, followed by the message, "Can we talk?" Is she aware of what happened? Or does she simply want to talk to her about how to get back in touch with Gabriel?

We'll have to wait until the second season to find out who she chooses.

Little Mermaid Live Action
Never Have I Ever Returns on Thursday