Ariana Grande's "Positions" Music Video displays fashion and sexuality as political acts. In 2020, a woman who openly celebrates fashion, wealth, and her own sexuality is an act of defiance.

This morning, Ariana Grande launched her latest music video "Positions" and the whole production is, in a word, legendary. Set in the White House, each scene in the music video shows a diverse, predominantly female team, led proudly by President Ariana. 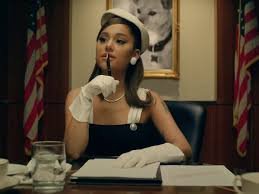 Like Hillary Clinton in an all-white pantsuit or Alexandria Ocasio-Cortez and her hoop earrings, each of Ariana's outfits was an act of defiance. Her aesthetic was a crossover between her classically glamorous style and the buttoned-up, polished guy we've come to expect from women in the White House. This distinction makes a strong message, as society frequently opposes the ideas of women – particularly women in government – if they dare to express pride in their beauty or accept their sexuality.

With any choice of outfit – from conventional Jackie O-inspired capes and pearls to pieces frequently used as sex icons, such as platform stilettos and a lace bustier top – Ariana demolishes the gender-based idea that a woman who celebrates her sensuality is incapable of being taken seriously. In fact, a woman's outfit or her personal sexual choices do not in any way affect her ability to do her job and do it well. 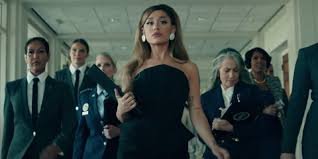 If you looked at "Positions" and felt that Ariana 's costumes were nothing more than an insignificant collection of fashion decisions, you missed the mark. Each outfit is a valuable reminder that women are allowed to be both sexy and smart – and that does not invalidate their opinions.

A Halloween Runway
Being Black Isn't an Aesthetic
Comments