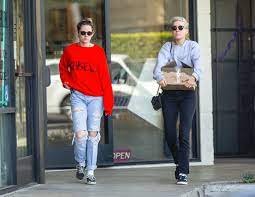 Kristen Stewart has announced that she and her boyfriend Dylan Meyer are engaged, and she's already planning what she'll wear on their wedding day.

During her appearance on The Howard Stern Show, Kristen discussed her dream wedding plans, including the surprising outfit she'd wear for her nuptials, according to Vanity Fair. She told Howard that she wants her wedding to be in Los Angeles so that "everyone can come," and that she wants a laid-back vibe, right down to her outfit. "I want to wear the best pair of Levi's I've ever owned, as well as an old T-shirt with a tuxedo print on it but cutoff, and I want to be barefoot." "Kristen described her ideal wedding ensemble. "Topanga is where I want to get married. I'd like to unwind. I want it to feel very welcoming. When she sees me dressed in a faux-tuxedo T-shirt, I want to see her laugh hysterically."

We're a little surprised to hear Kristen say Levi's instead of Chanel, given that she's a face of the house and wears Chanel for the majority of her red carpet appearances, but Kristen is full of surprises, and we could definitely see her rocking a pair of extremely cool vintage Levi's — albeit with something a little more glamorous than a tuxedo tee. She would also love to wear a suit, which is one of her signature looks.

Kristen envisions the ceremony being as low-key as her outfit and will forego some of the more traditional aspects of a wedding ceremony. "I'm hoping for a laid-back vibe. I don't want anyone to lead anyone down any of the aisles "she revealed. "We're just going to stand and say our vows, then have a f**king party." Guy Fieri was even mentioned as a possible officiant.